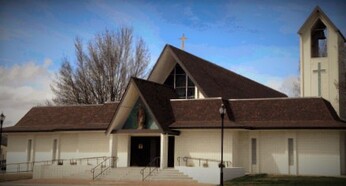 St. Malachy Roman Catholic Church is located in the Tehachapi Mountains currently administrated by Fr. Gregory Beaumont. Our parish is in the ﻿Diocese of Fresno, led by Bishop Joseph Vincent Brennan. St. Malachy (and the entire Diocese of Fresno) lies within the boundaries of the Ecclesiastical Province of Los Angeles, led by Archbishop José H. Gomez, the Archbishop of Los Angeles, in his role as the Metropolitan of the Province. The role of the Metropolitan Archbishop of an ecclesiastical province is largely ceremonial now, but historically carried substantial administrative powers.

We, the parish family of St. Malachy, are gathered from a multi-faceted faith, ethnic and social heritage. Nurtured by the Word of God, strengthened by the sacraments and empowered by the Holy Spirit, we seek to renew and enliven our common beliefs through the compassion of Jesus Christ. We are committed to help heal today's wounded society with a Christian spirit of mercy, love and justice while welcoming all who seek God's grace.

St. Malachy Church nestles in the largest mountain town in Kern County, where the Tehachapi Range and the Sierra Nevada Range meet. The timbered mountain passes played host to such pioneer missionaries as Padre Francisco Garces, Vincent Aguilera, Joseph Barron, Fr. William Dempflin (Padre Blanco), and Fr. Matthew Marron who offered the first recorded Mass in 1877. The Eucharist was celebrated in private homes prior to the founding of St. Malachy Parish.

Saint Malachy Parish had its beginnings under Father Patrick Malachy Bannon in 1887. At that time the parish was made up of eastern Kern County, most of Inyo County, and the Barstow; Needles and Lancaster areas, with the pastor living in Needles. In 1899 Tehachapi became the summer residence of the Needles pastor. The entire parish, at that time, covered more than 40,000 square miles, serving 850 Catholics throughout the whole area.

Over the years this large area was divided up, and, in 1924, Saint Malachy's numbered only 24 regular parishioners. Yet, Fr. FJ. Deschenes had a busy schedule.

To keep up with a growing parish, a new St. Malachy Church was built in 1937 under the direction of Father John O'Shea, at a cost of $6,800. Bishop Philip Scher dedicated the church at a Mass also celebrating the parish's Golden Jubilee.

Father Harry Eggert became pastor of Saint Malachy's in 1957, and, ten years later, under his leadership, our present church was built. Bishop Timothy Manning dedicated the new church on November 5, 1967.

Msgr. (then Fr.) Ronald Swett, pastor 1981-83, led the building of the Rectory/Parish Office Building in 1982. This building was converted into its current configuration as a Parish Office Building and Visiting Priest's Quarters when the Rectory was moved to a house off-site in 2010. Msgr. Seamus McMullan, pastor 1983-1992, led the building of a spacious parish hall, including much needed additional classroom and meeting space in 1991. Msgr. Joseph Barnes, pastor 1993-2004, refurbished the old classrooms into a youth center. The bell tower that was originally planned as an element of the 1967 church, but was deleted to save cost, was added as a separate structure adjacent to the church building in 1998 through a generous bequest of Msgr. McMullan.

Our Parish has grown from the 24 parishioners in 1924 to over 1300 families today. Looking back at our 125+ years of heritage, through the years we have continued to move ahead in the work of the Lord.